Don’t miss any of our events!

Check out the upcoming events

Cascina Piano – The wines of the territory

WineandSommelier / Wine Producers  / Cascina Piano – The wines of the territory 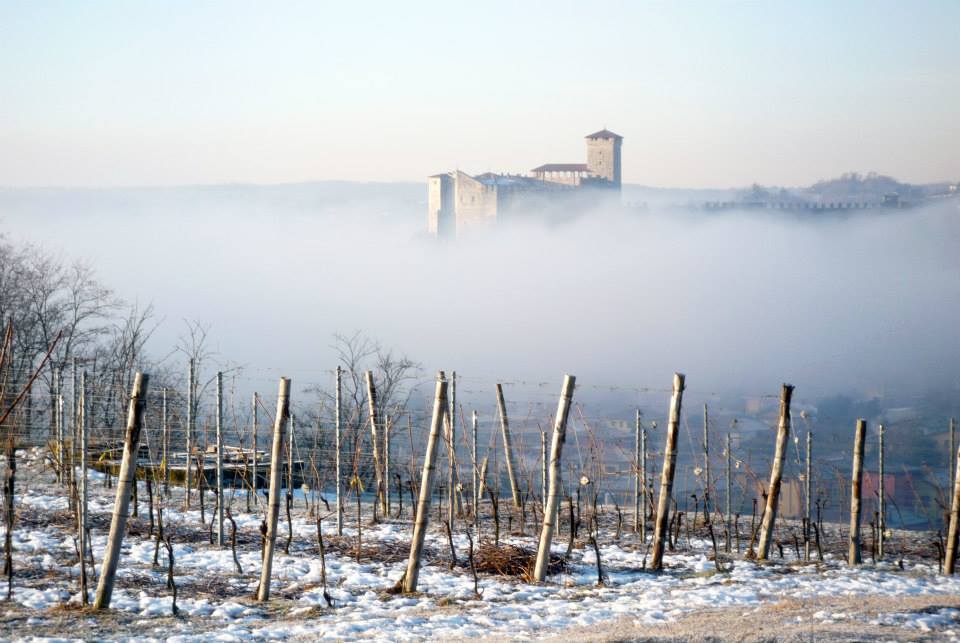 Cascina Piano – The wines of the territory

Some years ago, I was looking around a wine cellar of a restaurant on the mountain that overlooks Laveno and the Lake Maggiore, when I bumped into a bottle with a label that said “Cascina Piano – Ronchi Varesini I.G.T.”. I was very surprised, because I had never heard about it.

Intrigued, I went to ask for some information at the restaurant owner and he told me about the farm in Angera that was taking viticulture back to the area. I knew that, in the past, there were vineyards in the Varese province, but I didn’t know that some “pioneer” was proposing viticulture again.

Years later, I had the chance to visit the farm, taste their wines and meet the “pioneers”. With the curiosity that distinguish me I went back to Angera to have a chat with them.

We met Mr. Franco Berrini, founder of Cascina Piano, and we spent one hour together strolling along the vineyard, talking about their wines and their story and, of course, we took advantage of the meeting to answer some of our curiosities…

Where does the idea of vines, here in Angera, come from? 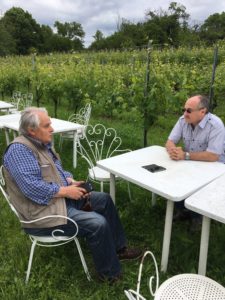 “The Angera hills are always been suitable lands, from here to Ranco and Piedmont hills. At the end of the nineteenth century, Varese was called “The great vineyard”, still before the second world war there were lots of vineyards. Then phylloxera came. Here nothing was brought back, because industry developed and everybody moved to the city and to the factory job. I too started to work in the industry, I was an executive, but I’ve always been linked to wine. I went visiting lots of wineries. In 2000, when I reached thirty-five years of service, I retired. I was sick and tired to work for other people, and I decided to do something I really liked.

Everything starts in that year: I looked for the people who are now my associates to whom others joined over the years.

The first step was attracting interest of the Institutions in order to obtain the Indicazione Geografica Tipica I.G.T. that allows to produce wine in quality and in quantity. Without it, you could make wines for a personal use only. To accelerate the obtaining of the I.G.T. we used the already existing vine varieties, and a couple of years after we made a revision and we inserted other vine varieties.

The process took until 2005, but when I understood that we would have obtained the I.G.T. I founded Cascina Piano, officially established on the 31st of March 2003. At the end of 2005 we obtained the I.G.T. Ronchi Varesini. We gave a first push, then Golasecca and Morazzone producers joined us.” 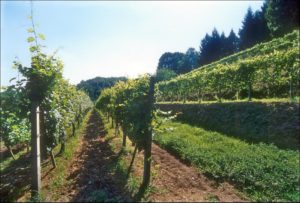 What is your relationship with the vineyard we are today?

“This was my grandad’s vineyard, the whole hill. When I was a boy I came here to help, but I wasn’t so happy, actually. I’d prefer to go to the lake!

The land was divided in four parts and I tried to gather them all together. I obtained two parts, with the 60% of the farmstead.

When I got this land, the old vineyards were still here, with a maggiolina method (traditional grape vine training method ed.) because once everything was done by hand. Now only one fourth of those vineyards survived, we put it all together and we remade them. We evaluated that the existing winery would be enough for the production we had. In this area, our wines are esteemed both for the choices we made and for the terrain quality: they come from Verbano glacier, that left the hills and the lake when it receded. The terrain is permeable, therefore when it rains there are no stagnations.”

What did you do with the inherited vineyards? Could you take advantage of them or did you have to start from the beginning? 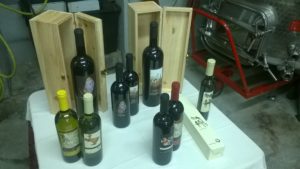 The varieties we have are all in all the original ones, we tried to keep up traditions. Our main variety is Nebbiolo, and the second one is Croatina which is one of the most diffused, from Piedmont to the Piacenza area. Merlot had already been imported after the second world war. We only have two plots of it. We would like to maintain national varieties, and we use Merlot only in the blend wines Sebuino and Verboso Rosso.

The challenge was with the white wine: the lake food requires fish based dishes which call for white wine. There’s no vine variety here that could represent this area, so I counted on an international variety, Chardonnay. Even if it’s not autochthonous, the results are great. We grow the 80% of it in the Ranco vineyard, because in the Angera ones we mainly have red wine grapes. The Chardonnay gives softness, while the Trebbiano – that grows in the Castabbio vineyard – gives sourness. When you mix those two qualities, you obtain a perfect wine to pair with fish.

Successively, we introduced the Bussanello. An oenologist from Alba suggested it to our oenologist. It is a cross between Riesling and Furmint, a Hungarian variety used to produce the Tokaji. We put a percentage of Bussanello with Trebbiano and Chardonnay and it made the wine easier to drink.

We also have Vespolina because it was already here, but the yeld is low, so we use it exclusively combined with other wines. Bonarda as well was already here, and we put it in the Verboso Rosso, our slightly sparkling red wine.”

Please, give us some more information about the composition of your wines. 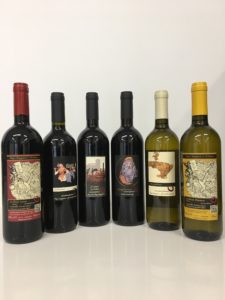 “The Sebuino is composed by 60% Croatina and the remaining parts are Merlot, Vespolina and Barbera.

The Primenebbie is a single-variety Nebbiolo, born in 2007. We let it age eighteen months in 500 litres barrels. In 2012 we improved it: a quarter of the grapes wither in the boxes and it is pressed in December. The obtained wine will be put together with the one obtained from the grapes harvested in October. The result is a much more structured wine. Last year (2017 ed.) was a particular one, the alcohol content reached more than 13,5 % vol.

The Angliano is composed by 65% Nebbiolo and 35% Croatina. It is left twelve months in 225 litres barrels. The first vintage was 2003. Last year we made a vertical taste of the vintages 2004, 2006 and 2009. It revealed itself to be an excellent wine, it kept the texture and it developed a black cherry nose.

The Verboso Bianco is one of our most appreciated wines, perfect to pair fish dishes.”

The “Sauternes” of Lake Maggiore

What’s the origin of the Mott Carè, “noble rot” wine of Lake Maggiore?

“It was born accidentally in a place called “the hole” in the local dialect, because the hills make a curve, and right outside there’s the Carè furnace.

That vineyard wasn’t ours, but when the owner died they gave it to us. In the upper part there were Nebbiolo and Croatina, and in the lower part there were Chardonnay, Malvasia and Moscato. We picked all the varieties we also had in the other vineyards. The Malvasia and the Moscato were left over, because we didn’t know what to do with them.  We decided to let the grapes overripening, and an associate who lived close went to check from time to time. Once, he called me and said, “It’s time to pick it, there’s a grey mould on the grapes”. He didn’t know what it was, but I did. I called the oenologist and we picked it. We started experimenting – 50-60 litres – and Mott Carè was born.

Now we grow it in Ranco, but the humidity rate was better in Carè, because there in Ranco there’s always a bit of breeze. The wine of the first three years was different, it had features that typified it.” 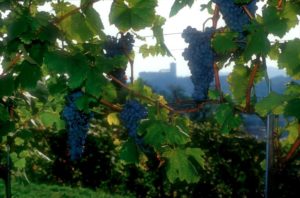 How is your relationship with your “neighbours”?

“People here have no historic memory, they don’t give value to the local wine renaissance, while we receive more enthusiasm from outside.

The province and the board of trade were helpful at the beginning. From 2001 to 2005 when we obtained the I.G.T. Ronchi Varesini there was excitement, because the regional agriculture Minister was from Golasecca. He had been very busy, he gave a new incentive to all the plantations that were about to disappear, as the Monate peaches and the Cantello asparagus.”

How do you see your farm in the future?

“We are trying to grow. We would like to transform the firm in a Ltd. and go from three to six hectares. We have no sparkling wines, and it will take time before we can get one. We should increase the Chardonnay and Bussanello varieties, but first we must fix the firm. We have the project, now we just need to make it work.”

Time flies, and after a tasting of “noble rot” wine from a bucket (they were bottling it that day ed.) and a chat on the curious origin of the labels, we greeted Mr Franco and we invited him for a guided tasting of Cascina Piano wines in our location. 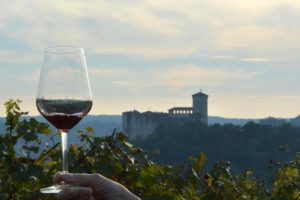